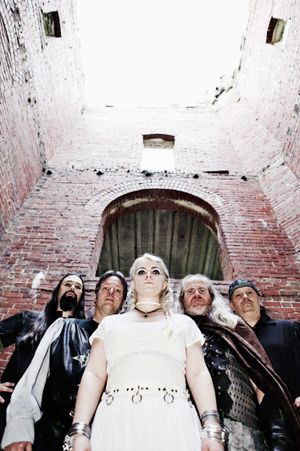 The concept for Von Isley started in the 90's when co-founder and guitarist Joshua Isley was in another band. He didn't want to just get up on a stage and play music for people, he was looking to put on a show for the audience. He was never able to find the right combination of musicians to see this concept take form so he shelved it. Forward to 2008; Joshua and vocalist Jennifer Isley wanted to form a band close to Joshua's original concept. They started looking for musicians and were lucky enough to find a few that fit what they were looking for and Von Isley was finally born in the winter of 2008.

In May of 2009, Von Isley with then brand new bassist J. Bennett, won honorable mention in a Battle of the Bands competition. The amazing fact was J. had only been with the band for a week at that time! They played several shows that summer as well as recorded their first EP. It was self-titled and contained 5 songs. It is now out of print but a few of the songs can be heard here and on their Facebook page. The summer of shows culminated in a performance at that year's RIOT on the River, an outdoor concert in Cuyahoga Falls, Ohio. Things were going great and it appeared as though bigger and better things were in store for the then four piece band.

Just when things start to take off, it seems a never-ending cycle of replacing members strikes. Starting in September of 2009, for varying reasons the band has changed members at just about every instrument at least once and just about every year. The exceptions being Joshua and Jennifer and of the other members, Robert has been in the band the longest and has just passed the 3 year mark, joining in early spring of 2010. The newest additions to the group are bassist Dan Beard and drummer Bruce Burgess. Dan and Bruce have played in bands together before Von Isley so when they joined the rhythm section already had the much needed chemistry. They have brought their own unique style and approach to Von Isley's songs and after just a few rehearsals as a band, Von Isley are already hard at work perfecting the original material and also writing new songs.

Things are once again looking up for Von Isley! Everyone is on the same page and pushing in the same direction. Always looking to add more of a stage show the band is putting together some new elements for 2013 and it looks to be a great year! In addition to new material, new members and new show elements, Von Isley also has a new charity they are supporting. Last year it was the Suicide Prevention Education Alliance of Northeast Ohio who benefitted from a charity show Von Isley hosted along with Cerebral Entertainment and several other area bands. This year Von Isley will continue their support of the SPEANEO but will also add the Make A Wish Foundation of Ohio to their mission of making a difference. Von Isley believes in leading by example. Anyone can talk the talk but when it comes down to it, as the old saying goes, you have to be the change you want to see.

Von Isley's style is a bit hard to nail down. Everything from Prog Rock/Metal, Gothic Rock/Metal, Euro-Metal, Hard Rock and Classic Metal has been used to describe their sound. Whatever genre you put them in or whoever they remind you of, one thing is certain; Von Isley won't quit no matter what obstacle stands in their way and they will always give the audience what they want.... an entertaining experience!